Do you believe in magic……? 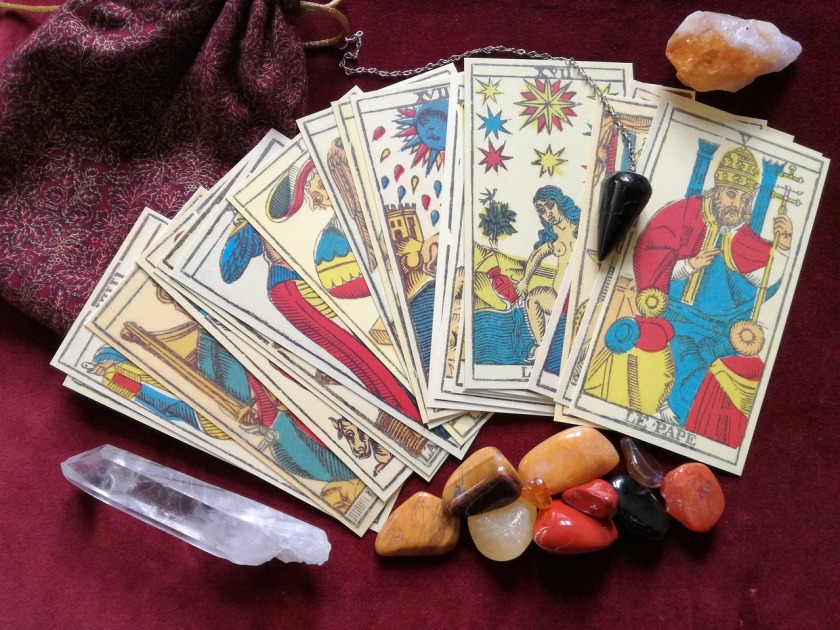 So I’ve bragged already about my amazing trip to New Orleans, but what I didn’t mention was its historical association with so called voodoo and things of that nature.  No trip to New Orleans would be complete without at least a tarot card reading.

I say this with some embarrassment, as at my age, surely I should know better than to tamper with such nonsense.  I’m not overtly religious but I am nervous about tampering with the dark side.  However I was in full holiday mode, and was at an uncertain point in my life career wise; I had left a job of eight years that I loved, to go to a corporate firm which I thought would be the right move for me but it absolutely was not and I was feeling uncertain, indecisive and vulnerable.  However with age and maturity on my side, I considered that I was more than capable of taking a tarot reading with a massive pinch of salt.

So it was, that on a typically sultry afternoon (hot as fuck, I can’t lie- hell could not be hotter) I sauntered over to the French Quarter to visit a reader who had been recommended (psychiccaterina10@gmail.com).  Catherina doesn’t strike me as the type of woman with any IT skills whatsoever so good luck if you try to email her!!!  And anyway why would she need email  – shouldn’t she know if someone is trying to reach her??!!

Anyway, my tactic was to ensure that I did not give anything away about myself- super sceptical.  The price was $35 (not cheap) and she asked me where I was from.  This was not a good start- she should know, and my broad British accent was a giveaway.

After shuffling the cards and calling out my name 3 times, she then proceeded to tell me about myself with astonishing accuracy.  There were no generalisations which could apply to almost anyone she described my personality to the point where I felt exposed and naked e.g. i’m impatient, opinionated, and the feeling of achievement and success is important to me.  When she talked about my temperament, she shuddered!

She then told me about my relationships, again with astonishing accuracy, she told me I had a semi serious person in my life, and with no word of a lie, that is the exact description I had given to this person- I knew exactly who she was referring to.  She also mentioned a player who I should give a wide berth- again I knew who she was taking about.  She had given me a piece of paper to take notes, and I was scribbling furiously as you may recall from a previous blog that my memory is fucked (an unfortunate consequence of being in your 40s and fabulous), so I was immensely grateful to be able to take a note.

She told me my lucky months and lucky numbers and was specific enough to tell me to be wary of a tall man with the initial R, and grey hair who would try to con me.  Watch this space.

She said a cheque would be coming my way, and indeed this has turned out to be very true (for those of you who are in England, take the time to ask banks and credit card providers, it the agreement included PPI- trust me, its worth the effort).  These manifestations felt weird- was it real or coincidence?  She also mentioned that I would meet “the one” in 2021 and he would have an English accent, although he would not be from England.  It so happens that whilst in NOLA, I met an American man and I asked her whether this could be him ” I just told you that you will meet him in 2021, it’s not 2021 is it, so it’s not him”. That was me told- and I have to say, I found her confidence reassuring (though she may be wrong as me and this guy seem to be getting on just fine).

The major concern for me was where I was going career wise, and she told me that I would be leaving my current role but what she said about my future career made no sense.  She mentioned that I am creative and that would be my career path. I have not got a creative bone in my body and it seems unlikely that at this time, I will suddenly acquire it. Apparently I will be working alongside sportsmen and celebrities and it was around this point that I realised what bull shit this was.     I was offered a job a week or so after the reading (no celebrities sadly) which she failed to mention, and there was quite a lot of tuff going on regarding my relationships with friends and family which she also failed to mention.

So what’s the conclusion?  A waste of $35 or money well spent for giving hope and a bit of harmless fun? Is 40 too old and naïve to even believe in this stuff?  Probably. Nevertheless, November 2021 is marked in my diary as the date when I meet my man.  She told me he would be wearing a white coat- he better be a doctor otherwise that would be just weird!

One thought on “New Orleans Pt 2”